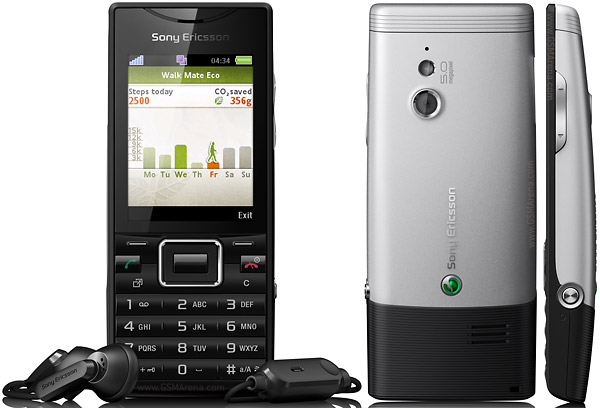 Sony Ericsson announced a few green phones last December and one among them is Sony Ericsson Elm Mobile Phone. The company claims this mobile phone to benefit the environment through recycled plastics, low power consumptions, green calculator, water borne paint, walk mate eco-applications and hazardous-free chemicals. With this Elm mobile phone, Sony Ericsson has taken a huge leap towards its mission to make its accessories 100% GreenHeart compliant by 2011.
Sony Ericsson Elm Green Mobile Phone comes with a dimension of 110mm X 45mm X 14mm and a weight of 90 grams. Its sleek design with a curve at the back side, makes it handy. This mobile handset has a 2.2 inches display of 240 X 320 pixels resolution. The support for 262K colours enables it to offer you a decent picture, video and text display. This Sony Ericsson mobile phone (Elm) operates at quad band GSM 850/900/1800/1900 and UMTS HSPA 900/2100 networks. It supports EDGE and GPRS for data services.
Sony Ericsson Elm GSM Mobile Phone has a 5 mega pixels camera, with auto focus and 4X digital zoom. Some technologies and settings are incorporated into this camera mobile phone to obtain an optimum image result. Notably, it has a face detection technology, by which this GSM phone automatically sets its focus on the faces in the subject. Another feature is the photo fix, which adjusts the light balance and contrast of the captured pictures. There is an in-built flash for this mobile handset that enables you to take good quality pictures in low light conditions. Besides, geo-tagging, smile detection technology, video recording, direct to web and photo feeds are available as well.
There is an assisted-GPS in Sony Ericsson Elm 5MP Camera Mobile Phone, so that you can find your destination easily using its location based services such as Wisepilots and Google Maps. The widget manager of the phone allows you to toggle between the different application widgets easily. With Facebook integration, Sony Ericsson Elm makes it easily to stay in touch with your friends. Any updates can be done directly from the phone itself. Furthermore, there is Google search enabled in it.
Sony Ericsson Elm has some integrated entertainment features in it. There is a media player with features such as TrackID, album art, sense me and Play Now, an FM radio with RDS application, 3D games, Java, Tracker, Walk mate, You tube and video streaming in it.
Sony Ericsson Elm comes with bluetooth, USB, Wi-Fi and PictBridge connectivity. You can have video calls using its camera and its in-built speakerphone. The support for text, multimedia, e-mail and instant messaging services make Elm a good messaging phone as well. The predictive T9 dictionary allows you for an accurate and fast input of messages. With its organizer, you can easily manage your mundane things.
The battery of Sony Ericsson Elm offers an attractive 10 hours GSM talk time and 430 hours GSM stand by time. But under 3G, it can stand only for 4 hours of talk time and 446 hours of stand by time. Regarding its memory, Elm has 280MB on-board memory. This can be expanded to 16GB using a microSD card.