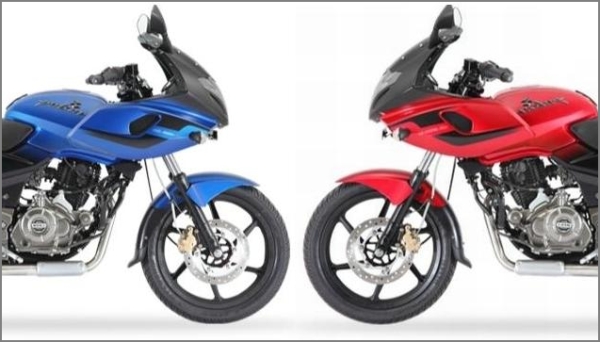 Bajaj India has come up with another facelift, this time it is their flagship bike - Pulsar 220. The new Bajaj Pulsar 220 F is reported to the fastest Indian bike ever built. Bajaj team has successfully reached the top speed of 144 kmph and thus made the bike as the fastest bike in the country . New Pulsar 220cc's gear ratio is optimized to achieve the top speed. Also Pulsar 220 F has been priced very competitively to its main rivals - Yamaha R15 & Karizma ZMR.

Bajaj has also launched the Street version of Pulsar 220 which has been priced around Rs. 3000/- than the Faired verison. Click here for more details of Bajaj Pulsar 220 S
Though Pulsar is not technically advanced like R15 & ZMR but if you compare the price then Pulsar 220 F is much better option. Pulsar 220 F is also more powerful with 21 Bhp on tap in Comparison to Karizma ZMR's 17.6 Bhp and Yamaha R15's 17 Bhp. So, if you wanna pay less for more power then simply go for New Pulsar 220 F. 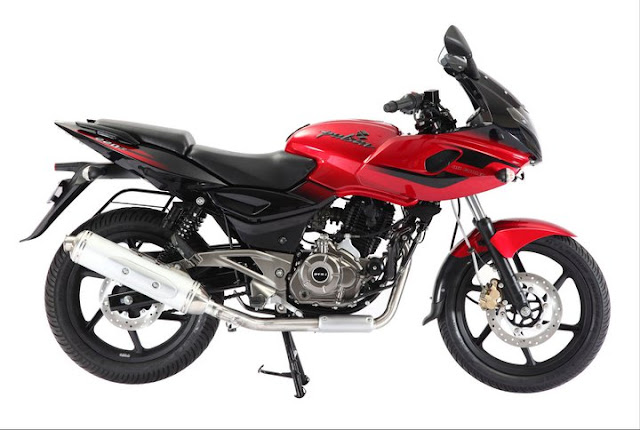 - Available in Pulsar 180, Pulsar 220 S and Pulsar 220 F
Bajaj Auto has added more zing to its Pulsar range of bikes with a flamboyant new color - Metallic Orange. The new color is exclusively available on the larger Pulsar 180, 220 and 220F variants. The new color bike comes on the back of great sales performance of Pulsar and is a Diwali gift to all Pulsar lovers. The two colour comes at a premium of Rs. 800 and is not a limited edition but a permanent one.
“Pulsar has proven its performance both on the road and on the sales charts as well as. It is by far the leading sports machine in India with a consistent 50% market share beating its Indian and Japanese competitors by a wide margin. To add more zest to the Pulsar, we have introduced a new two tone orange color that is definitely going to make heads turn. The color is specifically for the young Pulsar lovers and shows a good spectrum from a fresh yellowish orange in the sunlight to a deep, reddish orange in the shade adds a fresh new perspective to the bike,” S Sridhar, President Motorcycle Business, Bajaj Auto, said. 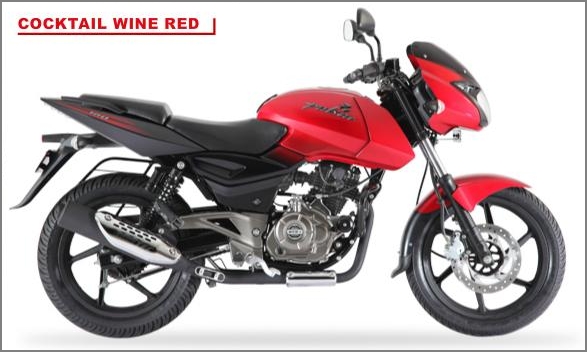 Update II: Minor cosmetic upgrade for Pulsar 220
Bajaj has given another minor face-lift to the Pulsar 220 and added new two-tone shade (black with combination of red) featuring new graphics. Technically no changes has been made to the Pulsar 220 F, it is powered by the same 220cc engine. 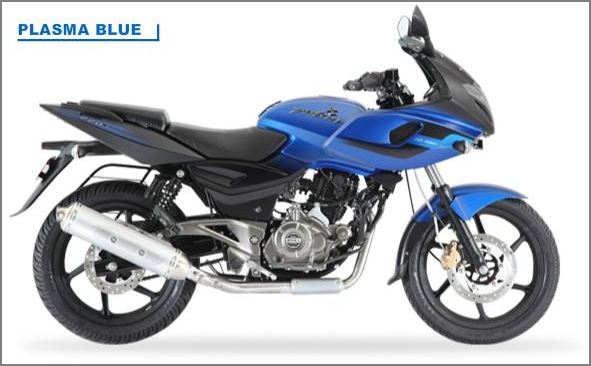 New Bajaj Pulsar 220 F gets all new 220cc oil cooled carburetored engine with 21 Bhp of power at 8500rpm and 19 NM of torque. Other changes to the engine insides include new combustion chamber, all new port geometry for optimized thermodynamics, new valve coat material to eliminate cardon formation, new design short skirt lower friction piston, an all new camshaft and 33% larger oil cooler.
Pulsar 220 F gets the performance boost with 32 venturi carburettor, the bigest ever used in India. In addition, the intake port in the cylinder head has been modified, along with higher lift and duration cam. A larger resonator and catalytic convertor is also used to increase performance. It also uses temperature based ignition mapping system through which the ignition timing is optimized to acheive good startability, quick warm up and outstanding torque. Pulsar 220 F features the standard five speed gearbox with one down and four up pattern. 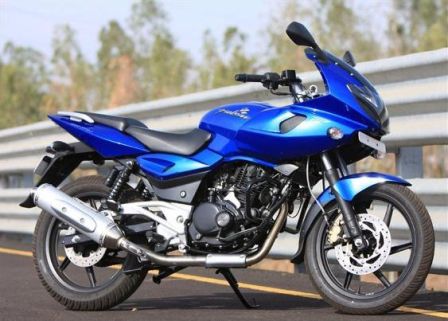 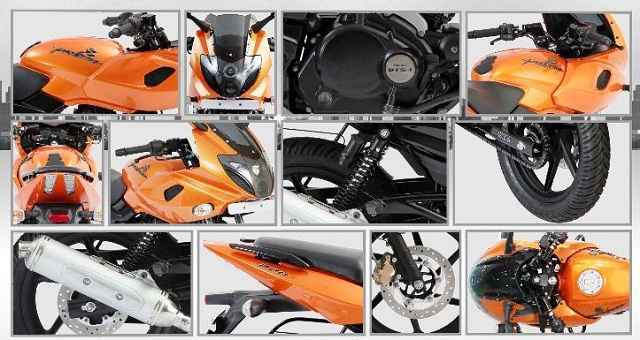 New Bajaj Pulsar 220 F looks better and smart than the outgoing model. It features all the ‘all-black’ theme like the recently launched new pulsar 150 & 180. Starting from the forks, swingarm, wheels and engine are all in a rich shade of black and that makes the bike look much leaner and meaner. It is the most stylish bike available in India after the Yamaha R15 & Karizma ZMR. Though it resembles its siblings in most sense the voluminous front fairing and the fairing mounted mirrors distinct the new Pulsar 220 F from others.
It comes with six spoke alloy wheels, stylish body panels, clear lens indicators and exposed chain. It offers a little under-seat storage cubby that can be unlocked via a cable release located under its lockable side panel. The new Pulsar 220 F also get the new 3-D graphics, redesigned console background and slightly revised clip-on handlebars. The tachometer face has also changed, while both front and rear brake callipers are now finished in gold.