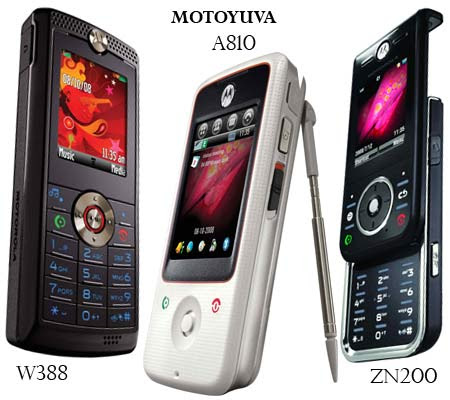 According to Lloyd Mathias, senior director and head of Sales and Distribution, India and South West Asia, Motorola Mobile Devices, “Our YUVA range of mobile phones offers Indian consumers a diverse range of affordable options. The YUVA W388 is a multimedia candy bar phone, YUVA A810 is a touch screen phone, and the YUVA ZN200 is a slider imaging phone. There’s a YUVA phone to suit everyone’s style this festive season.”

The MOTOYUVA W388 is an entry-level multimedia phone which sports a wide range of music features such as a dedicated music button, an improved MP3 player, MusicID application for song recognition, and an FM radio with radio data system (RDS) functionality, along with support for MicroSoft Windows Media player. The included functionalities help users to record excerpts of songs from the FM radio, and listen to music by using earphones or speaker phone. It also inlcudes Motorola’s pioneering CrystalTalk technology, promising better voice clarity on calls through noise cancellation.

Dressed in either white or black color, the MOTOYUVA A810 multimedia touchscreen handset comes equipped with advanced handwriting recognition, stylus to sketch, draw and doodle on the large screen, an integrated photoeditor to edit photographs, a 2 megapixel camera with in-built video player to encode video at 30 fps, Bluetooth with MMS support. Furthermore, the A810 includes FM radio, an in-built MP3 player with multiple visualizers, up to 2GB memory with an optional MicroSD card, an array of connectivity options such as GPRS with EDGE support and USB 2.0.

The multifunctional phone also boasts its unique applications that enable users to get news on cricket and access a variety of printed publication on the screen. In terms of cricket updates, the A810 can run live cricket text commentary, cricket masala news, wallpapers and cricket video downloads. The device can even display WAP version of printed publications including Hindustan Times, Financial Express, Indian Express, and Deccan Chronicle via the ‘Daily News’ link. Other features include three pre-loaded cricket games, ability to book flight tickets or railway tickets directly from the mobile.

Last but not the least, the MOTOYUVA ZN200 is a media-optimized phone which incorporates a 2 megapixel camera with 8X digital zoom, video recording capabilities, 1.9-inch TFTscreen with 176 x 220 pixel, ability to display images in both portrait and landscape modes, CrystalTalk technology and simple and intuitive interface.

The slider phone offers the best-in-class audio and comes embedded with a series of status LED icons, and Bluetooth wireless technology. It has a 30 MB onboard memory with up to 2 GB expandable memory.