on September 19, 2011
After the huge success of the Hyundai Santro and Santro Xing, it was only time that the company came out with another small car. The Hyundai i 10 was a strong comeback by the company to rope in not only the Hyundai loyalists but also cater to a larger audience. 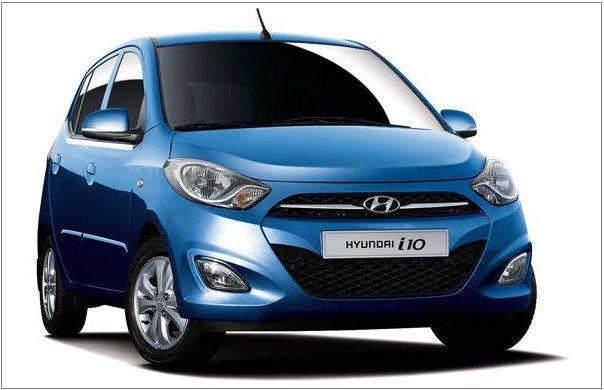 Hyundai i10 is the flagship model of Hyundai in India. It is a well known Hatchback manufactured in India (Chennai) and it is marketed globally. It was launched in 2007 which is a replacement for long lasting Hyundai Santro. It is the milestone vehicle in the history of Hyundai.


Hyundai i10 Engine – Hyundai i10 the new 1.2L 16V DOHC engine delivers 79 bhp at 5200 rpm and 114 Nm of torque at 4000 rpm. The all aluminum Kappa engine, the first in its class, delivers an all time low NVH levels (noise vibration and harshness) with low emission output. Hyundai's intelligent responsive technology strengthens and powers the engine to improve performance and mileage. The 5-speed manual transmission with overdrive that comes standard across all variants is quick and responsive. 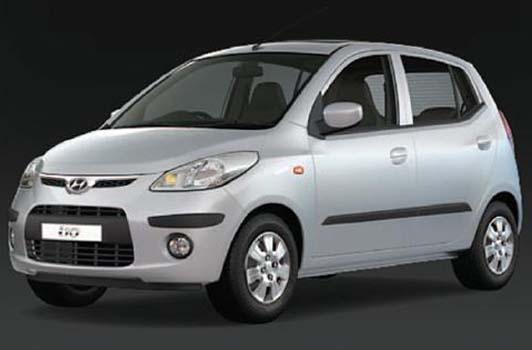 The ARAI has approved a fuel efficiency figure of 20.36kmpl for the i10 1.2 Kappa2, which is quite manageable, considering yours truly managed to squeeze out 34.94kmpl on one of the older i10’s mileage drives. But in real world conditions, the new i10 returned an overall fuel efficiency in the range of 14.5-15 kmpl after undergoing all our testing torture. Speaking of which, the new i10 can comfortably manage speeds of 140kmph before the unnerving feedback kicks in. These figures and feedback, however, will differ in varying conditions. Around the twisties the i10 Kappa2 is a potent handler. The engine is peppy and makes you push the car more, but with fuel efficient slim tyres, the i10 does seem skittish when pushed hard. The suspension is well calibrated and while it doesn’t induce a massive body roll as you would expect from a tall-boy, it absorbs the undulations on the road surface rather well compared to the other cars in its segment. The mechanicals are mated to safety features like ABS and airbags (driver and passenger), should the spirited driving go out of control. Speaking of the ABS, the i10’s unit feels very well sorted and doesn’t have the jittery feedback that one experiences on some of the other cars in its segment.

After the Chevy Beat made its debut, there has been a dearth of interesting designs in the hatch market. The Toyota Liva is the newest design here, even with its sedan derived styling playing in one’s mind. Also, the 2011 Swift would be easily dismissed for the older model here. The Figo also looks way too much like its discontinued cousin, the Fusion. Moreover, Hyundai i10 is the one with a significant design change post its face-lift and also the Tata Vista which looks too close to the Manza now. The Fabia’s facelift is also a blink it and you miss it types. If you must have noticed, almost all the cars here have a sedan derived out of them. The Fluidic Verna looks quite close to the i10, the Liva to the Etios, Swift to the upcoming 2011 Swift Dzire, the Fabia to the upcoming Lauretta and the Tata Vista to the Tata Manza. Its only the Figo which doesn’t have a hatch based on it. The older Fiesta as also the newer ones don’t even look like from the same family. 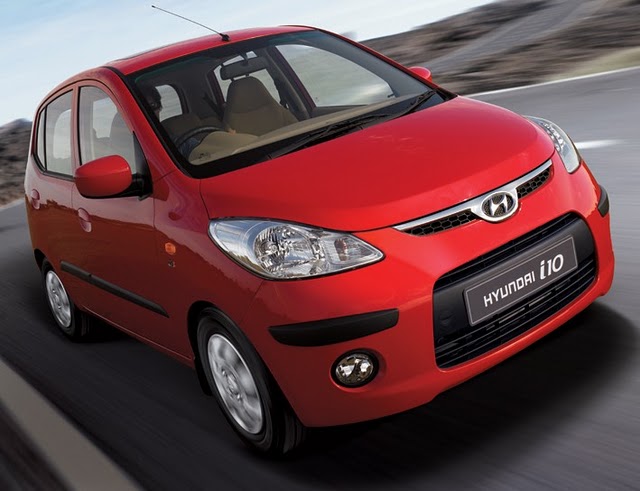 The two-tone colour scheme lends an air of richness associated with cars higher in the ladder of automotive segments and the plastics and knobs have a nice feel to them as well. One thing that stands out as a unique aspect is the placement of the gear-shift lever which is housed on the centre console. This liberates a good amount of space on the floor which has been utilized smartly by endowing it with useful storage spaces and cup holders. There are enough spaces to carry things ranging from your wallet or cell phone to bottles of a litre capacity. The luggage space too is decent but the deep loading-lip can be a cause of concern while loading/unloading baggage. The disappointment comes in shape of the door pockets which are narrow on the front doors and missing at the rear.

The interior otherwise is a congenial place to be in. On the comfort aspect too, the i10 is bang upto the mark. The front seats are shaped in a way to offer you the best support in all the right places. The head-restraints are not a different unit as seen in other cars and are an extension of the chairs.
The ideal driving position can be arrived at with ease and the view of the outside is pretty good. I missed a dead-pedal at the side of the clutch though. The rear bench is adequately firm and pampers you with good comfort levels. The protrusions at the bottom of the rear seats do not allow the occupants to stretch legs. 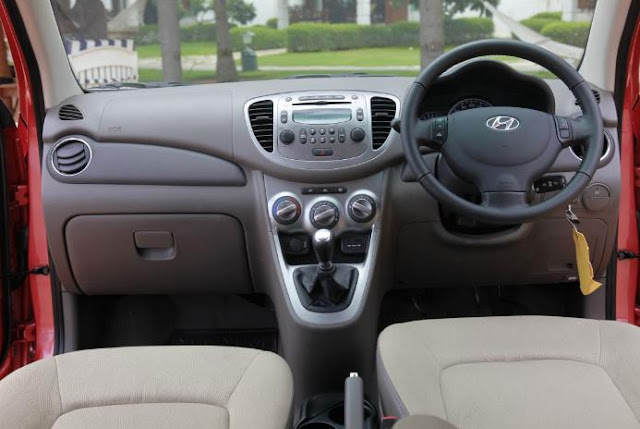 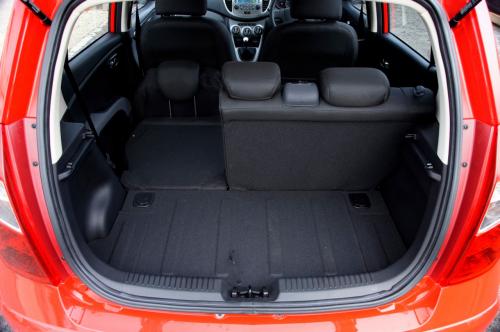 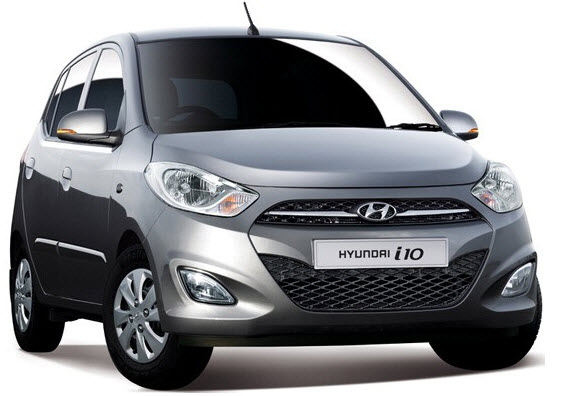 Hyundai i10 Exteriors: Hyundai i10 looks aggressive. There is absolutely no change in the way the i10 looks. The large Audish air dam which seems to be the norm these days takes center stage upfront. Then you have the stylish angular headlights with a thin smiley chrome grille which along with the high bonnet line looks funky cute. The side profile is pretty conventional with only the upswept kink on the rear window line adding some spice. When viewed from the rear three quarters, the headlights bulge out of the body like a pimple which looks a little odd. The tail section looks smart as well with the tail lights blending in perfectly with the overall design. The subtle spoiler with the thick black strip running across the bumper adds a sporty touch to the otherwise funky design. 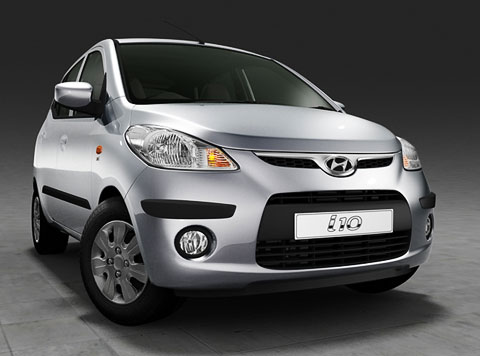 It does not bite an eyelid and will take you from speeds as low as 15kmph to all the way upto 120kmph, and that too without making the car feel like it's going to cough up to a halt at low speeds and die out of pain at higher revs. The engine is essentially the same 1.1-litre unit that powers the Getz 1.1 too and is a beefed-up unit of the trusted Santro, albeit with slightly more power which is now peak-rated at 67 horses with iRDE pasted on top of it. It is not as fast off the line as its smaller sibling, Santro, but it performs admiringly to dismiss the run to a hundred clicks in 14.5 seconds.
Santro is at one end of the spectrum, Getz on the other end, and i10 sits between the two as far as placing the product in the segment is concerned.Managing 16.8kmpl on the highway, the Hyundai i10 lay rubber on 12.3 kilometers of road before emptying the fuel tank further by one litre when while running in the city. 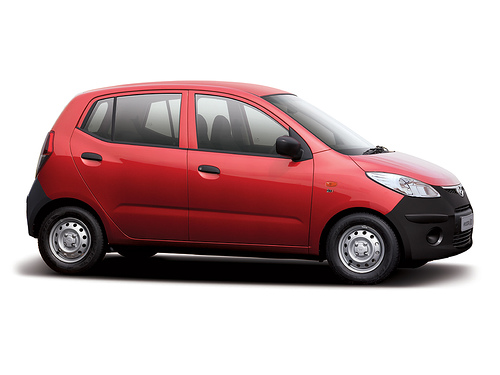 At slow speeds you surely can sense the odd pothole and suspension 'thuds' are quite audible, but it never swings towards the ‘bad’ side of the balance and the ride quality improves folds on end as you gain speed. Just one word of caution here - when going round a bend over a rough patch of tarmac, the i10 does feel a little unsettled with the car wiggling its tail a bit. Handling is neutral till the point that you do not demand a lot from the chassis. The steering is a delight to use and does not feel all that confused even when doing high speeds.

The steering wheel is good to hold too. Enthusiastic driving though will have you understeer heavily and those skinny tubeless tyres will howl for mercy. Brakes offer good bite and feel but the ABS version certainly felt more poised when the anchors were dropped in anger. The safety features of Hyundai i10 include dual air bags, seat belts with pre-tensioner; anti-lock braking system (ABS) and auto door unlock system that is sensible to impact of collisions. There are also child seat fittings, which can be adjusted in the front.
Hundai 2011 Hyundai i10 Hyundai i10 2011 i10 i10 features and specifications i10 Handling and Ride i10 Interiors i10 Versions price Santro Xing